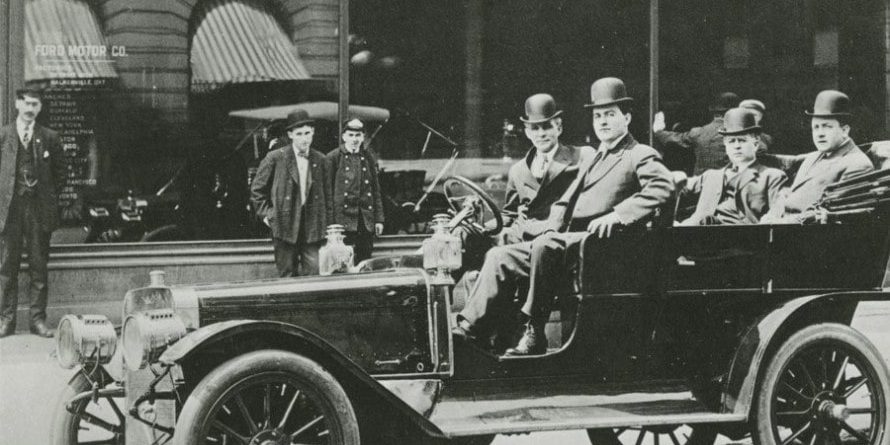 Henry Ford was an American Industrialist who was born on 30th July 1863 in Springwell Township, Michigan. Henry Ford was famous for the development of affordable automobiles specially built for middle-class Americans. Now he is known as the founder of Ford Motor Company. Henry Ford was not a millionaire since his childhood. He belongs to a middle-class family. His father (William Ford) was a farmer. At the age of 13, his mother died, his father expected him to join their family farm.

But Henry refused to join his father because he was passionate about machinery. So, he left home in search of a mechanical job. In 1879, Henry worked with James S. Flowers and Bros as a trainee machinist in Detroit. There he got a salary of $2.50 per week. Later in 1882, Henry returned to his family and joined his family farm. Here he became proficient in operating steam engines. Then he was hired to service the steam engines by Washing house.

In 1891, Henry joined Edison Illuminating Company of Detroit as an Engineer.

After a lot of hard work in 1896, Henry invented his first Quadricycle in Detroit. In 1899, many investors worked with him to form Ford Motor Company. During all those years, Ford faced many failures. But he did not lose his hope. Henry continued to improve his automobile motors. In 1901, he participated in a car race and won that increased the fame of his automobile.

During the era of (1903 – 1908) Ford company launched almost ten different car models. And the demand for automobiles raised. With the increase of automobile orders, Ford company decided to hire new staff at a double wage rate than any other automobile company. Ford motors offered a high-rate salary and fewer working hours to its employees. He announced to share the profit with the employees and to pay the minimum of $5.

In 1919, Henry played a trick and resigned from the presidency of Ford Motors Company.

He announced to start a new company that leaves the stockholders of Fort Motors in a threat of losing their market value. They sold all the shares. Henry bought all those shares through his agents. And for the first time in all of his life journey, he became all alone the owner of Ford Motor Company. He gave the presidency to his son Edsel but kept the charge in his own hands.

During World War I, Henry entered the production of aircraft. His first most successful aircraft was Fort 4AT Trimotors. This aircraft was very popular with many of its variations in the US. Then in 1933, his aircraft company was closed due to fewer sales.

In 1927, after 15 years of the production of Model T, Henry announced to build a brand-new model. At that time, Ford’s River Rouge factory became a complete production factory. In this factory, they started making all tools by using raw materials.

After so many years of hard work, Henry was famous as one of the richest men in the world. And finally, he died on 7th April 1947 at Fair lane.

See also:  LATEST ON UNEMPLOYMENT AND INEQUALITY IN SOUTH AFRICA

Financial Growth of Andrew Carnegie
May 23, 2021

Jeff Bezos and his financial growth! How did he accomplish his success and wealth?
May 11, 2021

A man who changed the way people comprehend money: Robert Kiyosaki
May 5, 2021
Go to Top